Secretive electric car company Faraday Future today held a press event at CES 2017 where it unveiled its first production vehicle, the autonomous FF 91. The unveiling comes just as Faraday Future has been rumored to be “on the brink of collapse” amid financial difficulties and employee departures.

Faraday Future has been a bit of a mystery despite its ambitious plans to remake transportation with a fleet of intelligent electric cars. Unfounded speculation had at one point suggested Faraday Future might somehow be related to Apple and its Project Titan vehicle efforts, but Faraday’s partnership with Chinese electronics company LeEco, which has electric car ambitions of its own, proved otherwise.


Nick Sampson, senior vice president of R&D and engineering at Faraday Future, took to the stage tonight to discuss Faraday’s work over the past two and a half years on “reformatting the future of mobility” with a focus on disruption.

Sampson repeatedly teased Faraday’s work as “more than a car” and a “whole new species” before delving into some of the connectivity aspects of the FF 91 with fiber internet speeds and 802.11ac Wi-Fi in the vehicle and large HD screens to allow media, games, and other content to seamlessly transfer to and from the car. Each passenger has their own profile of content and other preferences that automatically syncs to whatever FF 91 they are in.

Faraday’s autonomous driving chief Hong Bae then took the stage to discuss how the FF 91 will use facial recognition to recognize the driver and continuously learn from your driving behavior while also taking into account weather conditions and other factors to forecast your needs and automatically adjust car settings for comfort, performance, and safety using the most comprehensive sensor system of any production vehicle. A combination of over 30 sensors including cameras, radar, retractable LIDAR, and ultrasonic sensors combine to enable these features.

Automomous capabilities will also enable driverless valet that will allow the car to drop you off and park itself, and automatically return when you summon it via an app. A live demo showed the car cruising a parking lot on its own searching for a parking spot, eventually finding one, and then backing itself into the spot.

Peter Savagian, vice president of propulsion engineering, then arrived to discuss how the FF 91 is based on a “variable platform architecture” that will make it easy to develop vehicles of many different sizes and styles.

The FF 91 includes the most powerful electric propulsion system and largest and densest battery of any car, offering class-leading range and an open charging system that offers the fastest charging speeds of any car. With 130 kWh of power on board, the FF 91 can reach in excess of 378 miles of EPA adjusted range, making it competitive with traditional gas-powered vehicles. 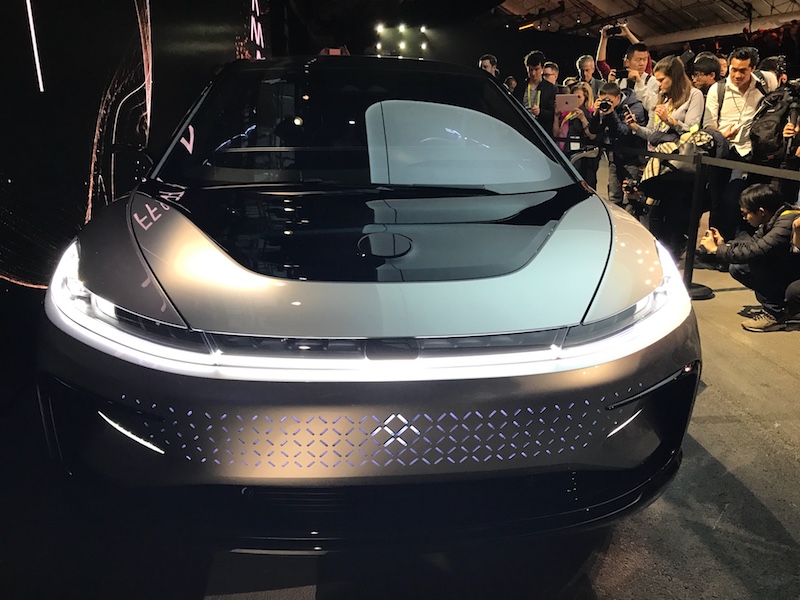 On the power side, Savagian touted 1,050 horsepower with instant torque for “an insane amount” of power and teased a 0–60 time that compares favorably with the world’s fastest hypercars. A live on-stage demo then showed a Bentley Bentayga, a Ferrari 488 GTB, a Tesla Model X P100D in Ludicrous Mode, a Tesla Model S P100D in Ludicrous Mode, and finally the FF 91 launching from a dead stop.

A video then showed an official speed test where the FF 91 hit 2.39 seconds for 0–60, beating the Tesla Model S’s 2.50 seconds to become what Faraday says is the fastest production electric vehicle in the world, despite the fact the FF 91 isn’t yet in production.

Richard Kim, vice president of design, discussed how the FF 91 is the “world’s first all in one car model” with a drag coefficient of 0.25 to maximize range. Kim also highlighted the attention to interior design, where space was maximized for passenger comfort while offering the driving dynamics of a mid-sized car. 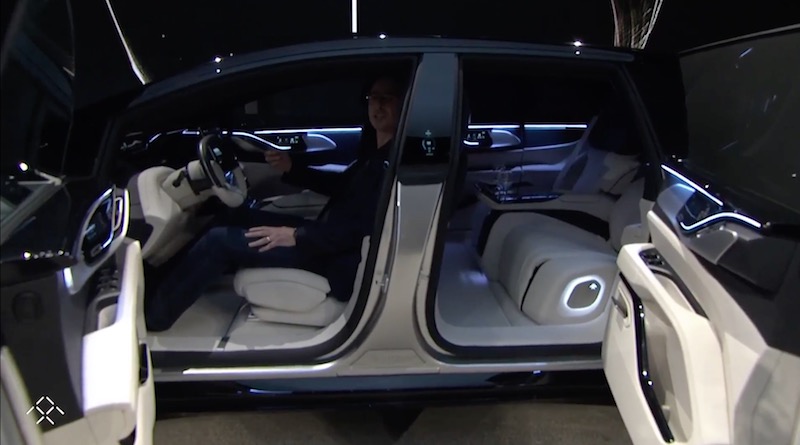 Kim then walked through a number of other features, including the lights, cameras, sensors, mirrors, capacitive buttons that replace door handles, and more, focusing on their integration into the design of the car. A few comments from LeEco founder YT Jia followed, and then a brief walkthrough some of the features and a photo op with Jia.

Wrapping up, Sampson discussed availability and pricing, noting that registration begins online at Faraday Future’s website. A refundable $5,000 deposit secures a car with estimated deliveries beginning in 2018, but final pricing was not announced. Additional details on the FF 91 will be released in the coming months.