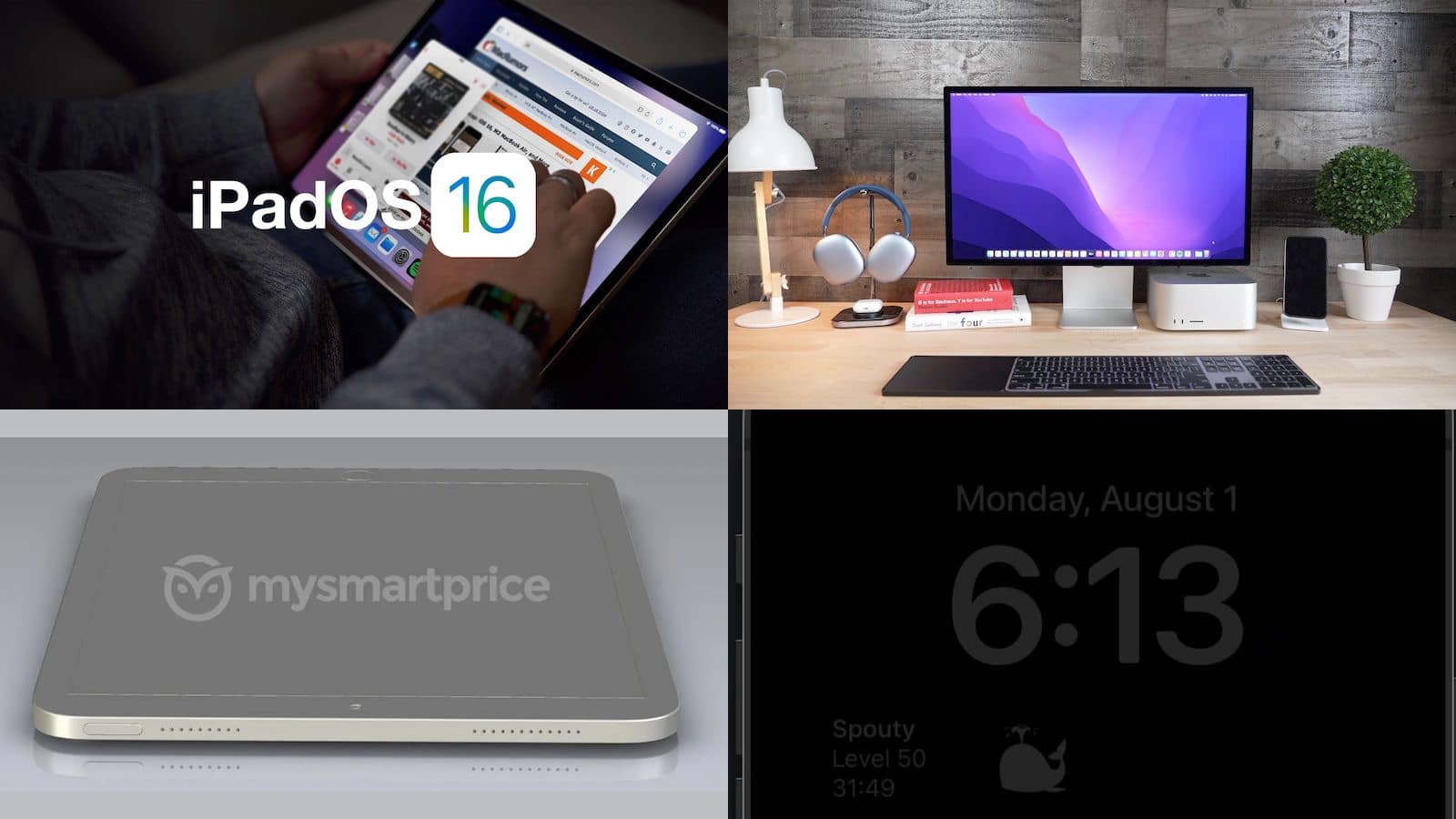 The big Apple news this week was word that the upcoming iPadOS 16 update apparently won’t be arriving alongside its counterpart update for the iPhone in September, largely due to a need to continue refining the new Stage Manager multitasking feature.

Other popular stories this week included more hints about the iPhone 14 Pro’s rumored always-on display, potential design leaks for the next-generation entry-level iPad, speaker issues with the Apple Studio Display, and more, so read on for all the details on these stories and more!

Apple to Delay iPadOS 16 Launch Until October
Apple plans to delay the release of iPadOS 16 until October, instead of releasing the update in the usual timeframe of September, according to a report from Bloomberg’s Mark Gurman.

iOS 16 and watchOS 9 are still expected to be released in September, with iPadOS 16 and macOS Ventura to follow in October.

Hints of iPhone 14 Pro Always-On Display May Be in Xcode 14
Rumors suggest that the upcoming iPhone 14 Pro models will feature an always-on display, similar to the Apple Watch, and hints of what that always-on display might look like are possibly hiding in plain sight in the latest beta of Apple’s developer tool Xcode.

The always-on display would let users view the time and date, number of unread notifications, and iOS 16’s new Lock screen widgets without having to tap to wake the screen.

Next Entry-Level iPad Rumored to Feature Flat Edges, Camera Bump, and More
Apple is expected to update its entry-level 10.2-inch iPad later this year, and newly leaked renders offer a look at what to expect from the device.

According to the renders, shared by MySmartPrice, the 10th-generation iPad could feature a design closer to that of the latest iPad mini, including flat edges and a protruding rear camera. The report also reiterated rumors of a larger display, USB-C port, 5G, and A14 chip.

Shortly after sending out the memo, Apple released a new Studio Display software update that appears to address the speaker issues.

Notably, the first MacBook Pro models with the Touch Bar are now classified as vintage. Apple first introduced the Touch Bar in October 2016 as part of a complete redesign of the MacBook Pro, but Apple has since dropped the feature on all models except the 13-inch MacBook Pro.

Belkin has designed a MagSafe-enabled Continuity Camera mount that allows an ?iPhone? to be set up in an ideal spot on a Mac to be used as a webcam, and while the mount is not yet released, several YouTubers have been able to test it out to give us an idea of how it works.

MacRumors Newsletter
Each week, we publish an email newsletter like this highlighting the top Apple stories, making it a great way to get a bite-sized recap of the week hitting all of the major topics we’ve covered and tying together related stories for a big-picture view.

So if you want to have top stories like the above recap delivered to your email inbox each week, subscribe to our newsletter!Tag: Top StoriesThis article, “Top Stories: iPadOS 16 Delayed, iPhone 14 Pro Rumors, Studio Display Speaker Issues” first appeared on MacRumors.comDiscuss this article in our forums
Go to Source
Author: MacRumors Staff