Starting on January 8, 2016, AT&T plans to introduce a “pricing simplification effort” that will see the end of device subsidies and two-year contracts. According to an internal training document shared by Engadget, new and existing AT&T customers will only be able to purchase a smartphone at full price or with an AT&T Next payment plan going forward.

As outlined in the document, the new rules apply to all of the phones that AT&T sells, including smartphones and more basic devices, which will be paid for using new installment plans. More information on how AT&T will handle corporate accounts and non-smartphone devices like tablets and wearables will become available after an official announcement from AT&T, but it appears certain corporate users will be able to continue making two-year contract purchases.

The shift away from two-year contracts and iPhone subsidies began with T-Mobile in 2013, when the company introduced its Un-carrier payment plans uncoupling device costs from plan costs. Verizon followed suit in August of 2015, debuting new smartphone rate plans and eliminating its subsidized two-year contract option for new users.

Existing Verizon customers can still renew their two-year contracts, but AT&T’s no-contract implementation is more extreme and will not offer existing customers the option to keep their contracts once they expire. 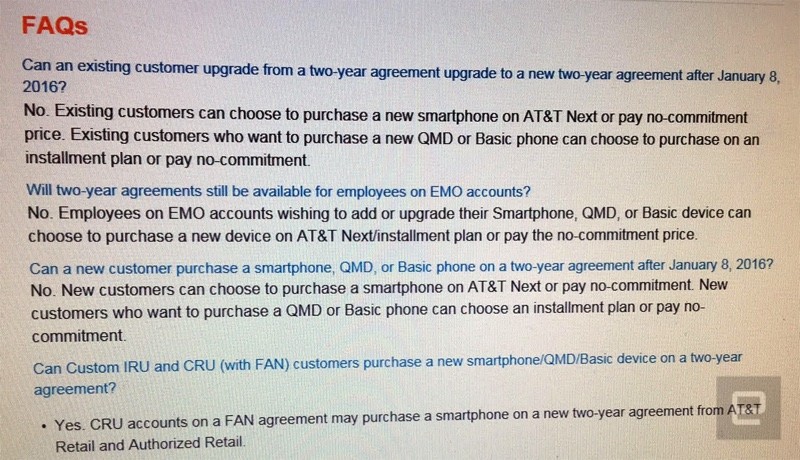 AT&T has already been working on shifting away from two-year contracts by pushing its Next plans. In June of 2015, AT&T forced Apple and other third-party retailers to remove the option to purchase AT&T phones with a two-year contract, leaving customers with AT&T Next or a full-priced smartphone as their only third-party purchase options.

Update: AT&T has confirmed its plans to stop offering two-year contracts in a statement given to Re/code.

“With $0 down for well-qualified customers, the ability to upgrade early and down-payment options available with even lower monthly installments, our customers are overwhelmingly choosing AT&T Next,” AT&T told Re/code. “Starting January 8, AT&T Next will be the primary way to get a new smartphone at AT&T.”