9to5Mac reports that Apple’s vice president of global security John Theriault has left the company, marking yet another key executive departure this year.

While the reasons for Theriault’s departure and his destination appear to be unconfirmed, speculation naturally turns toward this summer’s loss of another iPhone prototype. Apple has received some criticism over its handling of the case, which involved Apple security personnel being escorted by San Francisco police to a home to where the device had been traced. Apple’s security personnel conducted an unsuccessful search of the home, with the homeowner claiming to have believed that they were police officers and not private security agents. 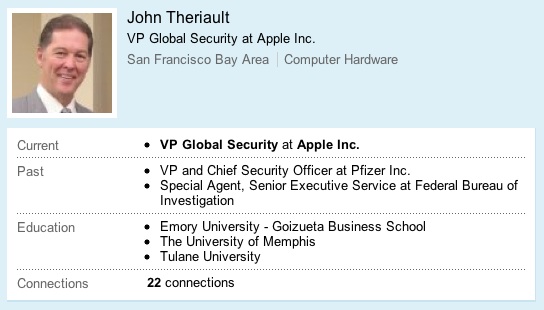 John Theriault’s LinkedIn profile
Theriault, a former FBI agent and Pfizer vice president, was profiled just two months ago for his role overseeing Apple’s anti-counterfeiting efforts. That work has taken on increased importance with the proliferation of fake Apple products and even fake Apple retail stores popping up in a number of countries. The most publicized location for these counterfeiting operations has been China, where Apple has been stepping up its anti-counterfeiting efforts in support of its own increasing presence in the country.

Update: AllThingsD confirms that Theriault has left Apple, and while the reason for his departure is officially said to be retirement, sources indicate that the circumstances surrounding the latest lost iPhone case are indeed the root cause.