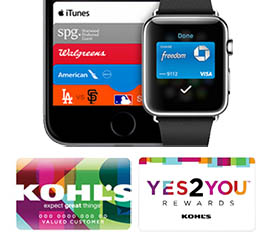 The combined functionality is currently available in approximately 250 Kohl’s stores in the United States, and the department store chain expects one-tap checkout to be available in all stores nationwide later this month.

Kohl’s is the first retailer to offer a one-tap solution for payments and rewards using Apple Pay. Customers can simply add both their Kohl’s Charge and Yes2You Rewards cards to Apple Pay and simultaneously pay and collect loyalty points upon checkout with one Touch ID tap for verification.

Kohl’s has supported Apple Pay since June 2015, and last October it became the first retailer to allow store-branded cards to be used with the iPhone-based contactless payments service. JCPenney is also rolling out store card support.

Last week, Apple CEO Tim Cook said that Apple Pay is “growing at a tremendous rate,” with transaction volume up five times compared to a year ago and the service gaining one million new users per week. Apple Pay is currently available in the U.S., U.K., Canada, Australia, China, and Singapore.

Cook noted that Apple Pay will launch in additional regions “soon,” including Hong Kong and Spain through a partnership with American Express later this year. Visa and/or MasterCard support may also be coming soon in countries such as Brazil, Canada, Hong Kong, Japan, and Singapore.