At a media event today, Microsoft announced a handful of new products and several updates to existing products coming from the company in 2015 and beyond. Topics for today’s event included the Microsoft Band 2, Lumia 950 and 950 XL smartphones, Microsoft Surface Pro 4, and the all-new Surface Book.

The company started off by going into detail about the Microsoft Band 2, the second version of last year’s wearable device. Microsoft said it took in a great amount of customer feedback in designing and implementing the new Band, which includes a new curved screen that with durable Corning Gorilla Glass 3 and an improved touch display. New Cortana integration lets users speak to the Band in order to send texts and make reminders, and the device also includes a barometer that measures elevation for everything from hiking to climbing stairs.


The company’s Microsoft Health app fuels the Band and lets users dig deeply into the data on everything from calorie burns to estimated recovery time for particularly intense workouts. The Band even includes an extensive golf measurement feature that can interpret the stroke of a swing and includes a score card that the company says is like “having your own personal caddy” on your wrist. Third-party partnerships with companies like Uber and Facebook are also incoming for the Microsoft Band 2, which will be available on October 30 for $249.

Microsoft also announced the Lumia 950 and 950 XL which are the newest iterations of the Lumia smartphone line, with 5.2-inch and 5.5-inch displays, respectively. Each of the new phones include a new feature called Glance Screen which showcases important pieces of information when a user pulls the phone out of his or her pocket, without the need to interact with the device directly and without using battery life. The Lumia 950 line also includes a 20-megapixel camera, Triple LED RGB natural flash, optical image stabilization, and a dedicated camera button on the side of the phone. 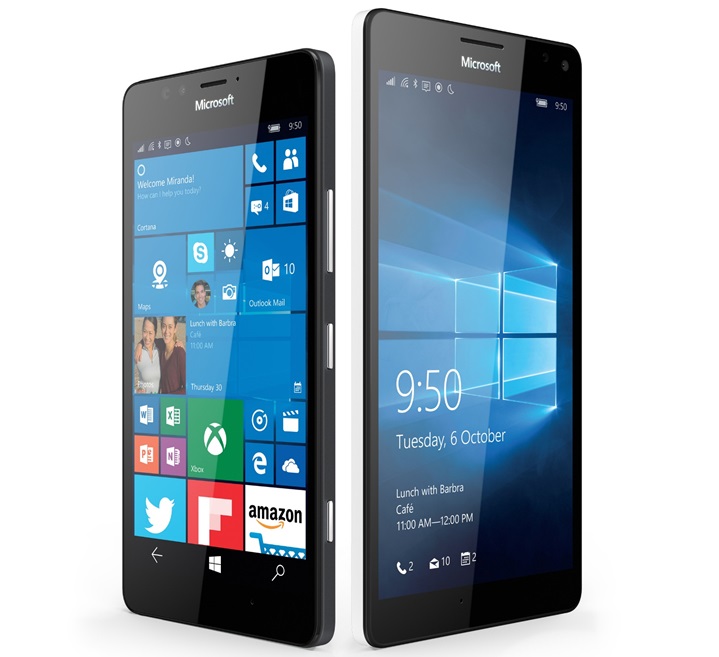 The 32GB 950 and 950 XL also includes a USB Type-C connector that Microsoft promises can charge the devices up to 50 percent within a span of 30 minutes. The company also showcased a brief beta demo of a face-recognition feature that unlocks the Lumia devices by simply holding them up to your face, similar to Microsoft’s hands-off sign-in feature introduced on the Xbox One in 2013. It then provided a brief demo of the Microsoft Display Dock, which connects a Windows Phone to a PC for the two devices to work in unison to manipulate documents and manage user data.

The company then covered the Microsoft Surface Pro 4, which it claims is the “thinnest, most powerful Core PC” shipped to date. The device comes with a 12.3-inch display, but the overall footprint of the device hasn’t grown any bigger, thanks to a reduction in the size of the bezels. The display includes a 0.4 mm-thin Gorilla Glass cover and the Surface Pro 4 will come with a new Surface Pen with 1,024 points of pressure and an eraser on the tip that also activates Cortana on the tablet when held down.