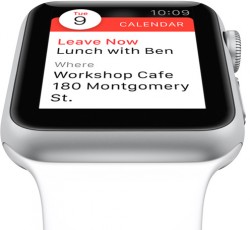 “Here’s a tidbit you might not know — in order to receive notifications from apps, the Watch must be on your wrist and locked. They require contact with your skin. There will be no in-app dropdown notifications or constant pinging while it’s off your wrist. Push notifications also cease when the battery reaches 10 percent. Those decisions speak to the care with which Apple is handling notifications.”

Apple continues to tweak Digital Crown on the Apple Watch, giving the button a “weightier, higher-end feel.” Pressing and holding down the Digital Crown activates Siri, which the report claims works well and can be used for labeling, directions and commands using a paired iPhone. The goal of the Apple Watch, the report describes, is to return some of your attention away from your smartphone by allowing you to communicate from your wrist on the go.

While both reports this afternoon have provided a closer look at the Apple Watch, there are still several question marks surrounding the wrist-worn device. That will change in less than three days, when Apple provides more details about the Apple Watch at its highly-anticipated “Spring Forward” media event in San Francisco. The keynote begins on Monday at 10 AM Pacific and MacRumors will be providing live coverage of the event.