Wireless bluetooth headphones have been gaining traction over the past few years as potentially reliable replacements to the traditional wired headsets offered in most smartphone boxes. With the announcement of the “Bragi Dash” at CES in 2015 — and the subsequent year of updates trickling out of the German company — interest in true wireless earphones that don’t even require a wire between the earpieces has begun to increase.

Interest in these products took another step forward last week when it was reported Apple may be working on a Dash-like product to be sold alongside the so-called “iPhone 7” later this year. The Apple-owned Beats by Dre brand already offers customers a variety of Bluetooth headphones, but none that are as small and undetectable as the Bragi Dash.

With the first round of Bragi Dash units now shipping to Kickstarter backers, a few sites have been sharing their initial impressions of the new earphones. The Verge, The Wall Street Journal, Engadget, and Wired agree on the Dash’s impressive suite of features, especially subtle motion gestures and ambient noise control, but some remain skeptical of their wide appeal due to syncing issues and a short three-hour battery life.


The Verge commented on the gesture controls, surprised by the amount of subtlety the Dash still managed to pick up. The basic gestures let users nod or shake their heads to accept or reject phone calls, which the site found to work nearly too well, and worried over accidental gestures causing miscommunications with the Dash. Still, The Verge‘s favorite feature was the ability of the headphones to allow ambient noises to pass through to your ears from their location in a room, even when music is playing.

With the Dash, you just swipe on the left earbud and the ambient noise around you suddenly appears in your earbuds. Better yet, Bragi has done some especially tricky software work to make that ambient noise sound like it’s coming from the corresponding direction. If someone is speaking to the right of you, it sounds like their voice is coming from that direction. You can do this while music is playing or not, and it’s the kind of feature that you wind up wanting on any pair of headphones even after using it just one time.

Connectivity issues were the main concern of The Wall Street Journal‘s experience with Bragi’s new headphones. The Bluetooth connection between the iPhone and the Dash became unreliable for the site “particularly on outdoor runs,” necessitating the purchase of an armband case to bring the iPhone closer to the in-ear headphones. Although Bragi promises an upcoming update will address such problems — and the Dash’s 4GB of internal memory can offset some iPhone connectivity issues — The Wall Street Journal remained skeptical on the consistency of the feature.

But in testing, another problem emerged: The Dash still connects via Bluetooth to the phone itself, and that connection dropped even more frequently than the Earin, particularly on outdoor runs. I ended up buying an armband case for my phone so I could get a more consistent connection.

A few times, the Dash fritzed out and became unresponsive until I put it back in its charging case. Buyer beware: These are surely signs that the software is a work in progress. (Bragi says an update is coming, which Dash owners will install by plugging the companion case into a computer.)

On the plus side, the site was largely impressed by the Near Field Magnetic Induction used by Bragi to keep the dual earbuds in sync, creating a “bubble around one’s head through which the sounds travels from one ear to the other.” NFMI was the reason the Dash were delayed in the middle of last year, when the team decided to find a better way for the earbuds to communicate with each other. WSJ also found that each of the Dash’s earbuds were reliable in their fit within the ear, never causing concern over whether either piece would fall out during long runs and workouts. 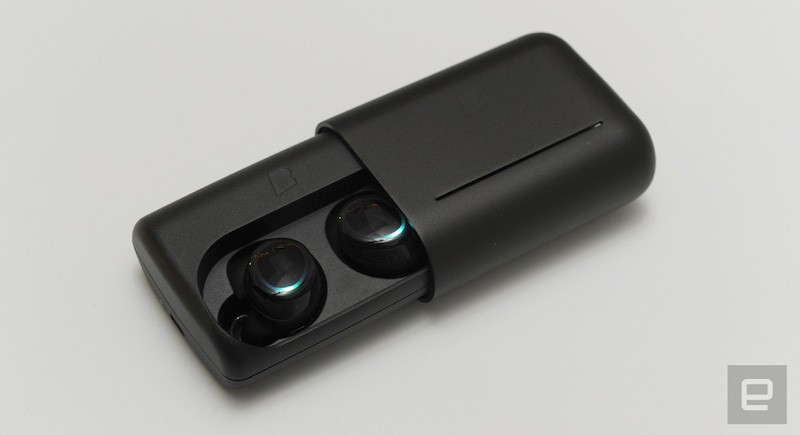 The Bragi Dash inside of its portable charging case, via Engadget

Engadget was doubly impressed by the use of NFMI as an alternative to Bluetooth connectivity between each piece of the Dash (Bluetooth is still used to communicate with the iPhone). Like most reviews, the site also commented on the usefulness of the Dash’s voice assistant that guides users through the initial setup and can also read out data and information back to them on the fly.

I insert a bud into my right ear, and then the left. A few seconds later I hear a woman’s voice. She explains how I can listen to music on my phone, afterwards there is silence; deafening silence. Until I connect my phone to the wireless headphones, and the lady returns, confirming that everything is good, and I’m all set. This is probably the slickest gadget set-up I have ever experienced.

Wired‘s experience with the Dash most succinctly categorized the headphones apart from everything else that is available on the market, the site calling Bragi’s new product “a computer, a platform, an entirely personalized object,” separate from competitors like Earins. When testing the basic music functionality of the earphones, Wired found the quality to be “fantastic” and referred to the new product as “remarkable” for what it accomplishes even considering the slim three-hour battery life.

The Dash is not a pair of headphones. Well, it is, but that’s like calling the iPhone a telephone. It’s not competing with devices like the Earins, or whatever truly wireless Beats headphones Apple’s working on for the iPhone 7. Dash is a computer, a platform, an entirely personalized object.