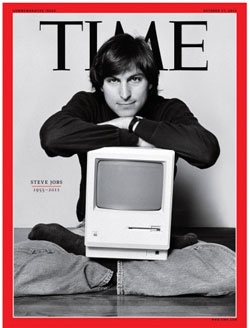 Time Magazine has cancelled its previously scheduled print run this week in order to put together a retrospective issue on Steve Jobs. In it, Walter Isaacson — Steve Jobs’ biographer — writes a preview of what’s to come, via Fortune.

In the early summer of 2004, I got a phone call from him. He had been scattershot friendly to me over the years, with occasional bursts of intensity, especially when he was launching a new product that he wanted on the cover of Time or featured on CNN, places where I’d worked. But now that I was no longer at either of those places, I hadn’t heard from him much. We talked a bit about the Aspen Institute, which I had recently joined, and I invited him to speak at our summer campus in Colorado. He’d be happy to come, he said, but not to be onstage. He wanted, instead, to take a walk so we could talk.

That seemed a bit odd. I didn’t yet know that taking a long walk was his preferred way to have a serious conversation. It turned out that he wanted me to write a biography of him. I had recently published one on Benjamin Franklin and was writing one about Albert Einstein, and my initial reaction was to wonder, half jokingly, whether he saw himself as the natural successor in that sequence. Because I assumed that he was still in the middle of an oscillating career that had many more ups and downs left, I demurred. Not now, I said. Maybe in a decade or two, when you retire.

But I later realized that he had called me just before he was going to be operated on for cancer for the first time. As I watched him battle that disease, with an awesome intensity combined with an astonishing emotional romanticism, I came to find him deeply compelling, and I realized how much his personality was ingrained in the products he created. His passions, demons, desires, artistry, devilry and obsession for control were integrally connected to his approach to business, so I decided to try to write his tale as a case study in creativity.

The release date of the book has been moved up twice, and is now October 24th. After Jobs resigned as CEO in August, he knew the end was near. The WSJ reports that Isaacson’s last interview was roughly four weeks ago, and “Jobs indicated at that time that he knew he was going to die soon.”

9to5Mac has another touching excerpt from Isaacson’s Time Magazine essay, which will hit newsstands tomorrow, that reiterates the love Steve Jobs had for his family, especially his children:

A few weeks ago, I visited Jobs for the last time in his Palo Alto, Calif., home. He had moved to a downstairs bedroom because he was too weak to go up and down stairs. He was curled up in some pain, but his mind was still sharp and his humor vibrant. We talked about his childhood, and he gave me some pictures of his father and family to use in my biography. As a writer, I was used to being detached, but I was hit by a wave of sadness as I tried to say goodbye. In order to mask my emotion, I asked the one question that was still puzzling me: Why had he been so eager, during close to 50 interviews and conversations over the course of two years, to open up so much for a book when he was usually so private? “I wanted my kids to know me,” he said. “I wasn’t always there for them, and I wanted them to know why and to understand what I did.”

Steve Jobs by Walter Isaacson will be released on October 24th. It is available via preorder from Amazon/Kindle, the iBookstore, and elsewhere.